March 8 is a key date for the feminist movement in different parts of the world. In Guatemala, in addition to the demands against machista violence and to expand reproductive rights, there is also the demand for justice for the 56 adolescents and girls of the massacre at Hogar Seguro. “On March 8, 2017, the State of Guatemala is going to commit a violent and feminicidal act against 56 girls who were seeking to escape from the Hogar Seguro Virgen de la Asunción, where they were enduring abuse and demanding rights to recreation, food and education” explains Lorena Cabnal, defender of the Red de Sanadoras Ancestrales del Feminismo Comunitario Territorial (Network of Ancestral Healers of Territorial Community Feminism).

Hogar Seguro is a care center for children and adolescents who are victims of violence, harassment and child abuse located in the municipality of San José Pinula, near Guatemala City. Even before March 8, the institute, which is run by the Social Secretariat of the Presidency of the State under the executive branch of government, had been the subject of complaints and court rulings. According to the report of the United Nations High Commissioner’s Office, the infrastructure and conditions were inadequate for its purpose of protecting and sheltering minors: the home was overcrowded, there was a shortage of toilet paper, toothbrushes, clothes, and shoes. There were lice, scabies and other contagious diseases, as well as gastrointestinal problems due to food spoilage caused by power outages. The staff was not adequately trained and the coexistence of children with such diverse problems (situations of poverty and abandonment, survivors of physical and sexual abuse) had alarmed the United Nations Special Rapporteur on the possible sale of children, the exploitation of child prostitution and the use of girls in child pornography. 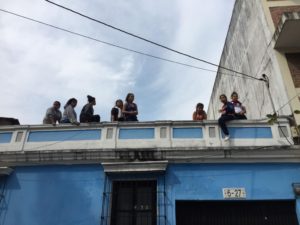 In addition to structural failures, there are dozens of complaints of overcrowding, lack of resources, poor supervision and control, violence, abuse, human trafficking and sexual exploitation. In 2016, 55 children and adolescents disappeared from Hogar Seguro.  In the same year, the Human Rights Ombudsman’s Office filed a complaint with the Public Prosecutor’s Office due to suspicions that there was a human trafficking and sexual exploitation network operating inside the structure. Some of the girls and adolescents who were burned to death on March 8 had filed complaints of violence and physical abuse some months before the massacre.

According to the investigation of the Public Ministry, on March 7, 2017, in the Hogar Seguro Virgen de la Asunción, some girls from the “Mi Hogar” sector started a riot to denounce inadequate living conditions and mistreatment. They had climbed on the roof inviting children from the “San Gabriel” section to join the rebellion. For reasons still unknown, the Hogar Seguro authorities opened the doors of the institute and about 100 internees left the premises. Before nightfall, most of the escapees had been captured by the National Police and taken back to the Hogar Seguro, confirming the United Nations’ view that it was a detention center rather than a home suitable for the protection of minors. To avoid new rebellions, they were locked up with padlocks separating the boys from the girls. The female inmates were placed in the narrowest space. 56 girls and adolescents spent the night in a 20 x 10-feet classroom with no water or toilets and only one door. The following day the situation had reached a critical level of insalubrity, urine was coming out of the classroom door and the detainees, some of whom were apparently pregnant, had to share the few mattresses available: without pillows or sheets and with their clothes still dirty and wet from the day of the escape, as some of them had tried to cross a river to escape from the municipality.

In this context of rage and desperation, the protests began again. A testimony recorded by the Prosecutor’s Office describes how “the girls shouted, that they were dirty, that they were cold, that they wanted to bathe and change […] they began to shout and break the windows”. To capture the attention of the authorities and ask for help, apparently one of the detainees set fire to a sponge mat to generate smoke and the fire spread. “We started shouting and hitting the door to get out of there”, says one of the survivors in her testimony reported by the United Nations and denounces: “we asked for help, but they did not pay attention to us”. It took nine minutes before the padlock, whose key was in the custody of the National Police sub-inspector, was opened and more than 40 minutes before the firefighters received permission to enter the Hogar Seguro. 41 girls died from asphyxiation by smoke, burned by the flames or poisoned by the fumes. Of those who survived, 15, suffered amputations, facial disfigurements, long-lasting injuries, severe psychological trauma and disabling conditions.

Among the 56 girls and adolescents detained on March 8, 16 were in the Hogar Seguro for “running away from home”, 12 for “rebellion”, five for “abandonment”, another five for needing “shelter and protection”, four for “drug use”, three for “sexual violence”, three for “social risk”, three for “unknown reasons”, two for “family problems”, one for “abuse”, one for being in conflict with the law and one because she was an orphan.

They were locked up for being poor, young and rebellious. Violence against women, as explained by indigenous and black community feminisms, is part of a system of disciplining feminine bodies and criminalizing those who break with patriarchal schemes. Systematic and brutal violence against women occurs especially in colonized territories where capital accumulation is obtained through dispossession and criminalization. In Guatemala, where transnational corporations extract value at the expense of local communities and the environment, women are at the forefront of defending territories and weaving alliances between peoples. That is why they are more subject to the attacks by the patriarchy and state repression.

“It’s very strong to say it, but I want to tell you because that’s how society is managed here in Guatemala: these girls are considered trashed bodies, bodies that are useless, marera girls [belonging to the maras, criminal gangs], girls who have conflictive quarrels with the law”, clarifies Lorena Cabnal, “March 8 for us native women, Mayan women and women who make up the Network of Ancestral Healers, is a date that carries with it the claims of the ancestral memory of women who have woven and have contributed to the dignification of the memory and spiritual existence, in their ceremonies for these girls”.

In the five months that followed the Hogar Seguro femicide, the members of Network of Healers carried out daily acts of public denunciation in Guatemala City’s Central Park, in the Plaza de la Constitución, and opened a space of memory and healing. “A ceremonial fire was started to mourn because for us it is a political mourning due to the fact that the State has perpetrated such violence like the femicide of 41 girls and left 15 survivors in such serious and complex situations in their lives and their families”, Lorena Cabnal says, “but at the same time it is the pain of the families, of the mothers, of the sisters, of the friends, of the grandmothers of the 56 girls who live in a country with the highest rates of femicide and sexual violence in the world, so that this does not happen again”.

The ceremonies were repeated the 8th of every month until the pandemic measures and the increased risk of mobilization of women defenders prevented public demonstrations. The daily caretakers of the space received harassment from public officials and presidential guards, threats, persecution, and being called witches or women who were performing satanic rites.

Three years ago the main square of Guatemala City, although officially Plaza de la Constitución, was named Plaza de las Niñas calcinadas (Plaza of the Burned Girls) on March 8 and has become part of “the historical memory of the women’s struggle” continues Lorena Cabnal: “today the Plaza de las Niñas is a space of memory and is also recognized within the towns as a spiritual space where the energy of the ceremonies was opened, a space of recovery of an ancestral territory taken during colonial times in the heart of Guatemala City”.

In these four years this space in which the names of the 41 murdered girls are announced aloud, their ages are named (all were between 13 and 17 years old), and their memory is kept alive around the fire and the crosses placed by their mothers, the space has become a symbol of struggle, resistance and the dignity of life. Communities, indigenous authorities, feminist movements, sexually diverse movements, spiritual guides, artists and social organizations gather in this space, nurture it and protect it from macho attacks. 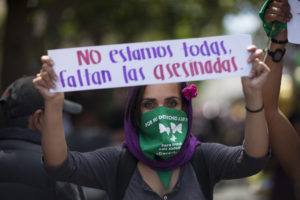 “Revictimization does not dignify the memory of the girls because it puts them in the role of martyrs. Just as we must not generate a commodified relationship of their memory, for example to solicit international cooperation projects for the girls burned on March 8,” continues Lorena Cabnal. “It is necessary to propose a healing relationship. Although we have lived through the onslaught of all the misogynist and patriarchal violence, we also have ways and means to revitalize ourselves in dignity: not only to fight in this resistance, but to dignify our bodies, our histories, and our memories.”

Four years after the massacre, there is still no justice: the trial is proceeding slowly due to appeals and injunctions that have been used to try to block the participation of the 15 survivors as witnesses. There are officials of the national police and authorities of the government of former President Jimmy Morales under indictment. Impunity contributes to preserve the context of violence against women and to re-victimize the girls and their families.

Until January 31, 2021, the National Institute of Forensic Sciences (Inacif) registered 68 cases of femicides. On February 21, María Elizabeth Ramírez, mother of one of the 41 girls murdered in the Hogar Seguro and plaintiff in the trial against the authorities responsible for the massacre, was murdered. The repression against women defenders continues but so does the struggle of women who do not conform to the rules that want them subdued, who with strength and dignity defend their bodies and their territories and who on March 8 will return to demand justice in the Plaza de las Niñas and in their communities.